According to the AAA Foundation for Traffic Safety, young millennials in Louisiana and throughout the country may be the drivers most likely to be distracted by their smartphones. A report from the organization says that almost 90 percent of drivers in the 19-24 age group engage in risky driving behavior.

A separate AT&T survey found that among all drivers, 70 percent said they used their smartphones while they were behind the wheel. The most common activity was texting with more than 60 percent of drivers admitting to this. However, use of social media was also popular with 27 percent saying they used Facebook while driving. For Twitter and Instagram, the numbers were 14 percent each. People also engaged in taking selfies, video chats and shooting videos of themselves while they were driving.

Each year, distracted driving kills between 4,000 and 6,000 people. In addition, up to 600,000 others are injured in accidents caused by distracted drivers. Several organizations have been formed to educate the public about the dangers of distracted driving. Parents are advised to set good examples for teen drivers. This may include a rule that all devices should be turned off once the car has been started.

The consequences of distracted driving may be serious. The result could be an accident and catastrophic injuries. Passengers, other drivers and pedestrians could be among the injured. When people are injured, the insurance company of the person responsible might offer compensation, but it might be too little to cover the cost of medical expenses, the damaged vehicle and lost wages from work. An attorney might be able to negotiate with the insurance company, but if this is unsuccessful, a lawsuit might also be an option. 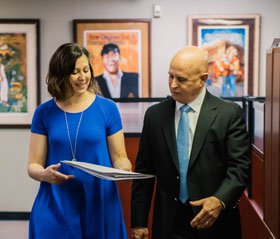